No matter if you’re stepping onto Captain Artley’s boat for one of his many Roatan excursions, like a sunset tour or Roatan deep sea fishing, you will surely hear about the island’s rich pirate history. Roatan’s pirate stories are best accompanied with a tropical beverage made with rum named after a famous pirate of the area, Henry Morgan.

Ok, no, Christopher Columbus might not have said “Ahoy,” but surely he would have exclaimed something on his own Roatan excursion when he spotted the coast of Guanaja, Roatan’s neighbor island. Columbus’ discovery of Honduras paved the way for Spanish settlements and mining operations to collect and export gold back to Spain.

Not soon after the Conquistadors arrived did William Claiborne of Virginia receive a grant from the Providence Company authorizing him to form a colony in what is now Old Port Royal, Roatan. The English port town comprised mainly of log-cutters, who, after brutal labor and little financial success, started to get a mischievous twinkle in their eye from seeing Spanish gold ships sail by.

“THERE BE THE CHEST, INSIDE BE THE GOLD” 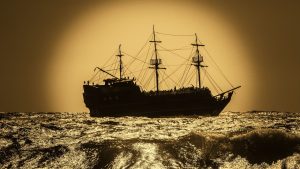 Bonus points if you instantly knew that was from the first Pirates of the Caribbean movie, which, fun fact, is based on the height of pirate activity in the Caribbean.

After Claiborne’s colony in Roatan had failed, around 1642, many of the settlers went back to England or elsewhere. It was the few that stayed behind, the ones with the gold twinkling in their eyes, that turned into gold-thieving pirates.

Using Port Royal as a launch point, the pirates of Roatan attacked the gold-laden Spanish ships many times over the course of the next 8 years. In 1650, the Spaniards decided to put an end to the piracy and laid siege to Old Port Royal, eventually conquering it and leaving it abandoned.

AN IDLE FORT IS A PIRATE’S PLAYGROUND

Over the next 100 years, about 5000 pirates of Dutch, English, and French nationalities used Roatan and its abandoned port as a hideout. These weren’t just no-name pirates; they were famous buccaneers whose names we know well today, like John Coxen, Blackbeard, and Henry Morgan (need a refill on that beverage?).

The golden age of pirates in the Caribbean was short-lived; by the late 1700s most of the pirates were gone, and full European settlements were established throughout the Honduran islands and elsewhere in the Caribbean.

While not much remains of the pirates today beyond their stories and the lore of hidden treasure, you’ll be reminded of their presence in Roatan’s history frequently throughout your travels on the island. I’m sure Captain Artley would give you a lesson on how to be a pirate along with your deep sea fishing Roatan excursions!